◊ My bites on a selection of themes in art, literature, poetry and culture ◊

to sense the body
in its brutish possession

its collar of snow
night no sun will ever thaw

(the world once
a place to go to)

and even now hope,
muddy and squalid,
draws potent lights out of lies,

and you make fire
from the forbidden remains of shipwreck

∞ Tempus Fugit. A few days ago, I was flicking through the recently published edited volume “Abdelkébir Khatibi, Postcolonialism, Transnationalism and Culture in the Maghreb and beyond”. (1) The reason for this is that I have been invited to the book launch next Tuesday as one of the contributors (with Debra Kelly and Rim Ferrani) to the third part of the volume with chapter 10. “Reading Signs and Symbols with Abdelkébir Khatibi: From the Body to the Text”. I have to admit that attending the launch feels a bit daunting; I am a bit out of practice when it goes to speaking in front of academic audiences. Luckily there won’t be time for me to make a complete fool of myself; the three of us have 5 minutes to speak. The first part of our article includes my analysis of two texts by Khatibi, La mémoire tattouée and La Blessure du nom propre that I had to exclude from my PhD thesis because of space constraints. (2) Then, three years ago my ex-PhD mentor Debra Kelly wrote to me and asked whether I would agree for this analysis to be used for an article on Khatibi. I was both completely surprised and delighted that she remembered that part of my work that was destined for dust; after all, I spent all of the summer of 2012 analysing Khatibi’s complex and elusive theory of the sign in the Arabic language (embedded in his concept of “la sémiotique transversale”).

∞ The excavation of my past work reminded me that I had a short exchange with the writer himself about eighteen years ago. It was at a conference in Paris on the work of the female Algerian writer Assia Djebar. (3) He asked me then (in French) whether I was writing. I can’t remember exactly what I answered, but I do remember him saying to me “Ecrivez un journal de bord” (“Write a log”). And that was that. I can still recall his frail figure, his inquisitive look under the small glasses, his modest smile. When I reread the lines I’ve written on Khatibi after all that time, it’s as if a different self has written them. Yet, my tattooed memories remain intact. Identity is dynamic; it is a sum of our (memorial) traces, would say Khatibi. Similarly to the movements of the gradually disappearing traces of ephemeral henna tattoos on the female body. (4)

∞ Body of text and tattooed bodies. For some time now I have been thinking about getting tattoos. I still haven’t made up my mind about it. I have to say here that I am fascinated by the Moroccan practice of tattooing as described in La Blessure du Nom Propre. (5) As Khatibi explains, the repertoire of graphic forms or “stoicheïa” in the Moroccan tattooing practice is restricted to a small number of basic forms that can be combined: the point, the straight line, the star, the cross, the stripe, the circle and the lozenge.

I try to imagine these signs on my body. Where would I place them? How many would I want to have? How would they look after a year? Five? Ten?

∞ From tattooed bodies and migrating signs to the dancing body. Rhythmic sound patterns; I leave you with an extract from Tempus Fugit by the Belgian-Moroccan dancer and choreographer Sidi Larbi Cherkaoui (Choreography: Sidi Larbi Cherkaoui & les Ballets C de la B). Ainsi, je ferme la boucle. And so, I close the circle.

(4) The Moroccan system of corporeal marking is “semiotically” significant: the (rhythmical) marking of the body begins with a central tattoo between the eyes known as “‘ayyacha” or the “intersoucilier”. The ‘ayyacha’, also called the Third Eye or the “troisième oeil”, divides the body geometrically along the central frontal line, but this primary division of the body is erased by the tattooing or the double repetition of the ‘ayyacha on the back of the body (under each of the buttocks), producing an “archaic triad” or a composed figure whose repetition front-back includes the symmetrical figure of the double.

(5) According to Khatibi, there is a distinction in the Moroccan practice of tattooing between tattoos that permanently mark the body and those that are provisional, introducing a principle of trace-erasure of the sign. In the first type, the body is permanently marked or punctuated with a pin immersed in a black, greasy substance (a mixture of plantes, coal and spices). The second technique is called the “hargûs” or “tatouage provisoire en couleur” and it is used for ceremonies and festivities or to mark important passages in a Moroccan young girl’s or woman’s life; the colour red of henné or the hargus is used. These henna tattoos are ephemeral; they fade away after ten to fifteen days, erasing the sign. 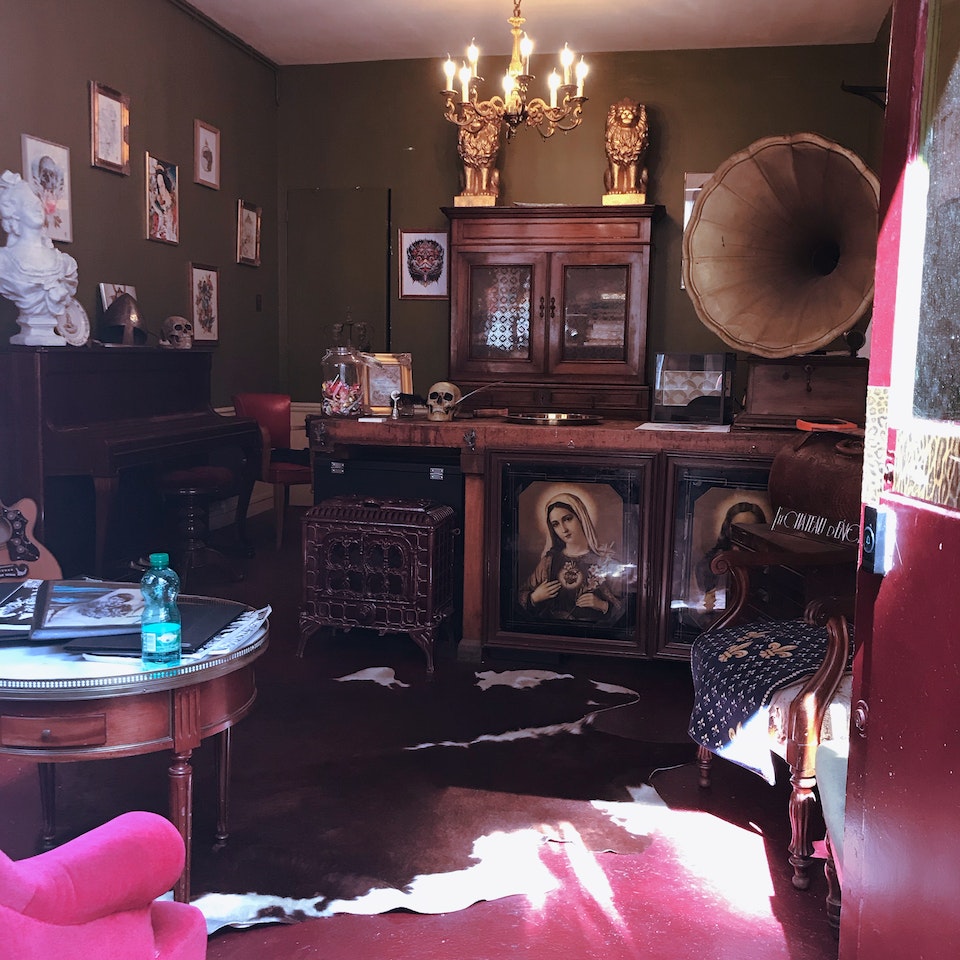